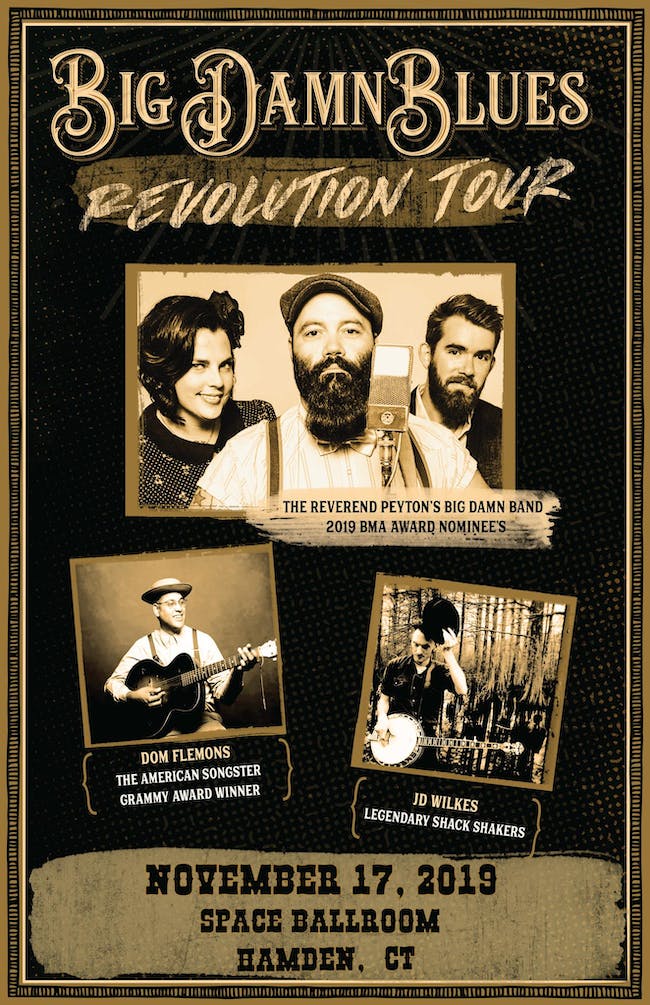 2019 BMA Award Nominee The Reverend Peyton's Big Damn Band are the greatest country-blues band in the world. They are led by Reverend Peyton, who most consider to be the premier finger picker playing today. He has earned a reputation as both a singularly compelling performer and a persuasive evangelist for the rootsy, country blues styles that captured his imagination early in life and inspired him and his band to make pilgrimages to Clarksdale, Mississippi to study under such blues masters as T-Model Ford, Robert Belfour and David “Honeyboy” Edwards. Now The Big Damn Band is back with an explosive new record and world tour. Reverend Peyton's guitar work on the new record Poor Until Payday is phenomenal and howls the blues. It debuted at #1 on the iTunes Blues Chart and #4 on the Billboard Blues Chart.

Grammy award winner, two-time Emmy nominee Dom Flemons is known as “The American Songster” since his repertoire of music covers over 100 years of American folklore, ballads, and tunes. Flemons is a music scholar, historian and a multi-instrumentalist. He is considered an expert player on the Banjo, Fife, Guitar, Harmonica, Jug, Percussion, Quills, and Rhythm Bones. In 2018, Flemons released an album titled “Dom Flemons Presents Black Cowboys” and received a Grammy nomination for “Best Folk Album.” Flemons co-founded the Carolina Chocolate Drops who won a Grammy for “Best Traditional Folk Album” in 2010 and were nominated for “Best Folk Album” in 2012.

JD Wilkes is a true renaissance man - musician, visual artist, author, filmmaker and self-proclaimed "southern surrealist". He is an accomplished multi-instrumentalist (notably on harmonica and banjo), having recorded with such artists as Merle Haggard, John Carter Cash, Mike Patton, and Hank Williams III. Wilkes is perhaps best known as the founder of the Legendary Shack Shakers, a Southern Gothic rock and blues band. Fans of his work with Legendary Shack Shakers include Stephen King, Robert Plant and former Dead Kennedy's frontman Jello Biafra. Rolling Stone named Wilkes as the “best frontman” at the 2015 Americana Music Association Festival for his performance with the band. Regarding the group’s "southern gothic" lyricism, Billboard Magazine said "[Wilkes writes] mind-blowing lyrics rife with Biblical references and ruminations of life, death, sin and redemption.” Legendary Shack Shakers have toured with the likes of Robert Plant and The Black Keys, among others.