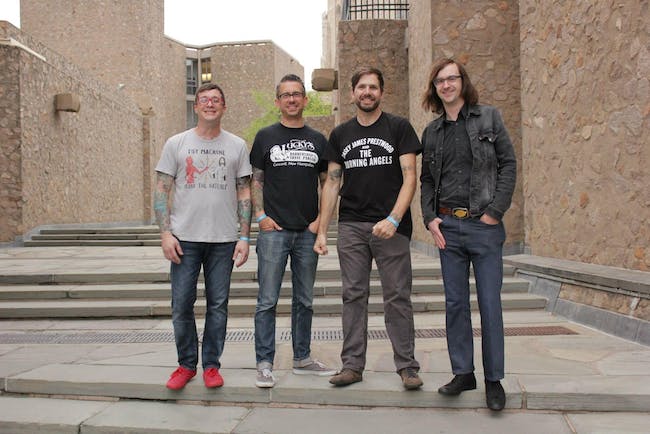 Hot Rod Circuit makes music for those times when you feel most alive. Whether that moment is during heartache or while driving down the road, Hot Rod Circuit's Vagrant Records debut and third full length, Sorry About Tomorrow, fits just about any moment it may be needed for.

Hot Rod Circuit have been around for 5 years, steadily winning fans since their inception in Alabama in 1997. The band relocated to the Northeast indie scene in 2008, initially residing in Connecticut. While releasing two full lengths on Triple Crown Records, the band crossed the US countless times on tours with The Get Up Kids, Jimmy Eat World, Saves The Day, Avail, Hot Water Music and At The Drive-In. Playing 250 shows a year, Hot Rod Circuit fine tuned their live act and soon made the jump to Vagrant Records.

Touring incessantly made them a tighter band, and they took this cohesion into the studio. "This is the first record we've made that I'm excited to listen to when I get home at the end of the day, says singer Andy Jackson, adding, "this is the first release I've truly proud to say I made" And it shows. Sorry About Tomorrow is a step forward for the band, combining melody and technical accuracy with stronger production by Brian McTernan, it is certain to garner them appeal in a more mainstream arena.

Classifying Sorry About Tomorrow into one distinct style is nearly impossible. There are elements of punk, rock and roll, indie, and hardcore all under the umbrella of pop. After only a few casual spins, even the most skeptical listener will be hooked on the moods and textures of Sorry About Tomorrow.

Hot Rod Circuit have already played 150 shows in 2002, and are heading out this fall to play another 30 with Dashboard Confessional and 10 headlining dates. The band will be the first to tell you there are no claims of grandeur in their music, just honesty and the promise of being the soundtrack to your next good time.