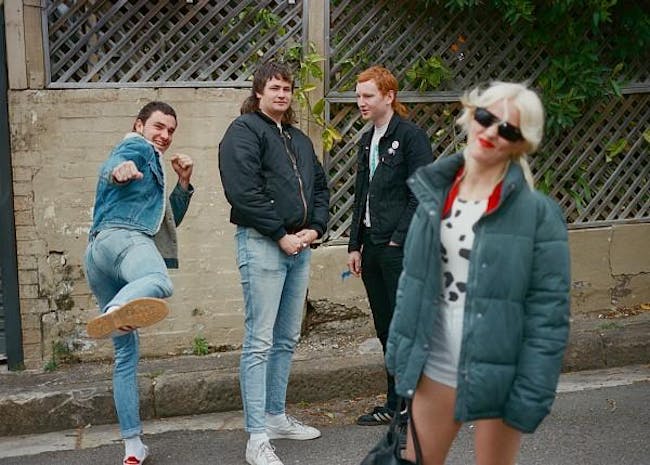 Amyl and the Sniffers

AMYL AND THE SNIFFERS

Punk animals Amyl and The Sniffers have risen up from the sticky carpets of Melbourne’s underground music scene to storm the world stage. Renowned for their chaotic, ball-tearing live show, Dec Martens (guitar), Bryce Wilson (drums) and Gus Romer (bass) smash through the hooks at breakneck pace while “human firework” Amy Taylor lights up the stage — an exhilarating ride that routinely leaves fans covered in blood, sweat and saliva.

Amyl and The Sniffers self-released two EPs before signing to King Gizzard and The Lizard Wizards’ Flightless Records label in Australia and joining the band on a 22-date tour of the USA. Shortly afterward, Amyl and The Sniffers signed to ATO Records for North America and Rough Trade for the rest of the world — the first Australian band to sign as album deal with Rough Trade since The Go-Betweens.

The band generated a ton of hype at The Great Escape and played to packed houses at SXSW, topping the list of Rolling Stone’s best acts of the 2019 event, with sold out tours soon following across the UK, America and Australia. Major festival appearances came next, including Primavera, Glastonbury, Roskilde and All Points East, plus an invitation to appear on the hallowed UK music TV show Later…with Jools Holland.

Released in May 2019, Amyl and The Sniffers’ self-titled debut album earned the band a spot on the BBC1 playlist plus rave reviews around the world. At home, the band scored Album of the Week on Double J, 3RRR and FBi radio, and hit the number 1 spot on the Australian vinyl chart, an ARIA nomination for Best Rock Album, and a place on the Australian Music Prize shortlist. Internationally, the band became media darlings, with features appearing in publications as diverse as Thrasher, MOJO and The Guardian to Vogue, Vice and Flaunt.

From high fashion to dirty punk zines, heaving back rooms to major festival stages, the band continues to explode boundaries, giving no fucks and winning new fans every time they play.

Children of Finland Fighting in Norway (COFFIN) are a 5 piece punk/rock/metal band hailing from Sydney’s Northern Beaches, featuring 3 Guitarists and the lead vocalist on drums. Formed in 2005 as schoolmates influenced by a huge love for music, skateboarding and a good-times-all-the-time attitude. Over the years they have developed their own sound, loosely described as Aussie Pub Punk

They have gained a passionate following for their unique take on punk and rock music and have become notorious for energetic and addictive live shows. Gaining them plenty of gigs supporting world class bands like Rose Tattoo, TSOL, Celibate Rifles, Cosmic Psychos, Misfits, Amyl and the Sniffers etc, as well as completing several Australian headline and supporting tours

Amyl and the Sniffers